This Case Is About Forcing Maricopa County Election To Follow The Law – Nothing More, Nothing Less

So Folks, please be with us in court. 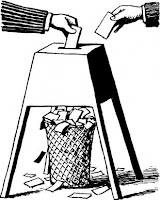 So far the score is even: our request for a jury was canned, their motion for summary judgment has been ignored.

We’re even on points, no knockouts; round three is the main event.

This case is about forcing Maricopa County Election to follow the law – nothing more, nothing less.  As such, most of the issues are going to be of limited benefit outside of Arizona, although the basic concept of this sort of suit (Mandamus action) is possible across the nation.

The one major except is the use of uncertified software - that points a finger through Maricopa County back to the state and national-level voting system certification processes.  Arizona bars the use of voting system software that isn't federally certified to the standards promoted under HAVA.  While those standards are weak, they still scared Sequoia into dodging them completely on a key part of their product line – a part that can subvert the outcome of elections and produce data that both Maricopa County and Sequoia want to bar us from having.  This part of the case is at the cutting edge of election law issues – the intersection of the rights of election software producers to maintain trade secrets versus the right of the people to know how our vote is counted.

This part is complex, but in a nutshell: Sequoia created an entire section of their election system that they didn’t submit for testing like they should have – in direct violation of AZ law.  They then needed to hide the extent of the security breach that resulted.  To do THAT, they needed to make sure the data files altered by this illegal module don’t see the light of day and to make sure, they labeled the data files as “containing proprietary trade secret software”.  Right.  In the data.  So we couldn’t get it via public records.  Well that was a mistake, because there’s no possible way the data files could conform to the rules on “election software”, which isn’t supposed to change from election to election.  The data files do.  So it’s gonna be comical: if they still claim the data contains “software”, they admit to a class 5 felony for installing uncertified software (the data) on a certified system.  If they blanch at the idea of confessing to a felony and call the data “just data”, we get it via public records and per our insider tipster (did I mention him yet?) we get to prove the program that produced the data damn well should have been certified.  It’s the world’s dumbest catch-22 and they’ve already walked right into it.  At stake is yet more proof that the voting system vendors have been systematically “gaming” the voting system test process nationally – and that is the big enchilada in exposing the insanity of the US election system.

Out of a total of four national voting system test labs ever approved, three have been thrown out for poor performance and let back in only with conditions.  The two worst labs (Wyle and Ciber) are based in Huntsville AL where we hope they do better working on military aerospace flight systems for the Redstone National Arsenal, their main business.  The one lab not thrown out (iBeta) obviously specializes in more important matters: they’re mainly a video game tester.  We wish we were kidding.  This is the fig leaf of sanity used to rationalize all electronic voting in the US: “don’t worry, the test labs are watching”.  This is what we’re about to strike a blow against.

At the local level, Maricopa County has overreached.  They've designed a complete election process tuned for fraud.  Take a look at this one chain of destruction:
·   Pollworkers don't sign polltapes per illegal orders.
·   Also per illegal orders, pollworkers don't put one set of polltapes (signed or otherwise) into the “official returns envelope” also know as the conflict envelope, a signed and sealed clear envelope that election officials can't get into without major effort such as a court order or a special election team monitored by multiple political parties.
·   Pollworkers are illegally told not to allow observers to see the precinct totals after the polls close.
·   Ballot materials are transported by just one person instead of the two required by law from opposite parties.  You guessed it.  Illegal.
·   Operations at the central tabulator computer are barred from any functional observation of any sort.  Even when observers spotted obviously illegal activity, the county's response was to deny the use of cameras to document it and then tampered with the evidence.
Specifically, what we saw was a Sequoia employee running a Sequoia-owned laptop connected to the central tabulator.  The laptop in turn had a cellular modem plugged into it, allowing an easy cross-connection between the cellular internet connection and the central tabulator station.  Internet and outside connections to the central tabulator are flat banned.  The county's response to an immediate complaint was to deny the use of cameras to document it and then tampered with the evidence. This happened on 08/23/10, just one day before the election with over 230,000 ballots all ready counted.

As a final insult, the county rigged the selection of precincts for the 2% hand audit, refusing to publicly commit the results as per the law or anybody else what the individual precinct results were beforehand.  They illegally released "combined results" only.  This allowed them to rig the rest of the precincts to whatever degree they want.  Once they get the list of precincts selected for a count, they could "un-hack" those in the central tabulator database of votes and shift any hacking in the selected precincts to the unselected keeping the previously reported "combined results" intact.  Arizona's hand-count law (new in late 2006) was designed to block this sort of thing.  Maricopa County subverted it. They purchased the Sequoia system soon after that law was passed and stopped having the polltapes signed.

We're going to take it back.

This is our fight for our rights.  Join us.  Popcorn is unfortunately not allowed but otherwise, this is going to be the best show in town.
****
The links below are for reports prepared as part of the California Secretary of State’s “Top-to-Bottom Review” of state-certified voting systems.

Their findings on the Sequoia voting system were very disturbing.  These reports include a source code review team; a red attack team, which performed security tests on the Sequoia system’s hardware and software. Those teams have submitted separate reports on their findings.

Review of the Documentation of the Sequoia Voting System:
http://www.sos.ca.gov/voting-systems/oversight/ttbr/sequoia-doc-final.pdf

For A You-Tube Blast To The Past, Maricopa Elections Finds 489 New Votes With 2nd Machine Recount in LD 20 September 2004.