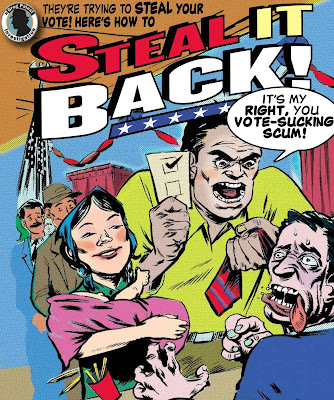 The Brad Blog has just broken a story over the lawsuit the North Carolina Republican Party has filed against the State Board of Elections over the use and failures of the electronic touch screen voting machines. Amongst the allegations is the votes being cast for Republican candidates are being flipped to Democratic candidates instead. The Daily Comet also reported. Below is an excerpt from The Brad Blog on this breaking story:

"This afternoon, Legal Counsel for the North Carolina Republican State
Executive Committee sent a letter [PDF] to the NC State Board of Elections threatening legal action if their "demands" were not "immediately" met for taking a number of specific actions to mitigate reported touch-screen voting problems describes as "significantly more widespread than the NC GOP initially understood."

The problems in contention are related to reports of the state's ES&S iVotronic e-voting systems reportedly showing votes as flipping from Republicans to Democrats on the screen. The threat from the state GOP comes on the heels of complaints made last week in two different NC counties, Craven and New Hanover. Those reports were a switch from previous years when voters in dozens of states had reported votes flipping largely from Democratic to Republican. Branch charges that the party has "received word" that similar problems have emerged in "Mecklenburg...Randolph...Cumberland, Wilson, Pender, Forsyth, Lenoir and other
counties," which all similarly use the oft-failed, 100% unverifiable ES&S touch-screen voting machines. The same systems are also used in more than a
dozen other states...

In a sharply worded response [PDF] to Branch's letter late this afternoon, Gary O.
Bartlett, Executive Director of the State Board of Elections charges the GOP
letter was "apparently intended to elevate isolated occurrences with touch screen voting equipment into a crisis of confidence in the integrity of the election." Bartlett downplayed the concerns, as elections officials usually do, describing them as "no different than ones that must be addressed in every election."

North Carolina Election Integrity advocate Joyce McCloy, Director of NC Coalition for Verified Voting and editor of Voting News tells The BRAD BLOG that vote flipping in the state "has historically been from GOP to DEM". She also notes the acrimony between the state Republicans and the Board of Elections, explaining that many of the county BoEs have a Democratic majority and that the state's largest local e-voting vendor, Print Elect, who program the machines in a number of counties, is a "BIG donor to the DEM Governor".

In truth, however, there is no way to know how any touch-screen voting machine actually records a vote during an election. What is shown to voters on both the screen and the so-called "paper trail" printed out along side it (on many such systems) may not reflect the way the votes are actually recorded internally. To that end, there is no way to know that any vote has ever been recorded accurately, as per any voters intent, for any candidate or initiative on any ballot in any actual election using a touch-screen voting machine.

The ES&S iVotronics were indeed certified at the federal level, but by contractors selected and paid for by the vendor themselves and who tested the systems in secrecy. Subsequent independent analysis, by a number of states, have found "serious" flaws in the systems.

A study released by the state of Florida in 2007 found the systems were vulnerable to viral vote-flipping attacks. The state eventually decertified the systems after 18,000 votes were lost all together during a 2006 U.S. House special election decided in favor of the Republican by just 369 votes.

One of the "DEMANDS" listed in the GOP attorney's letter to the State Board of Elections is for an order to be issued requiring poll workers to keep a record of complaints (which Bartlett says they already do), but to include "the identify of the voter, the time the voter voted, the specific voting machine used by the voter, and the nature of the voter's complaint" in such incident reports.

Such a requirement, however, would likely result in the loss of privacy for that voter's secret ballot. That's just one more problem to add to the ever growing list of reasons why, as the GOP's Branch correctly noted, "the touch screen systems should have been been banned." In addition to North Carolina, the ES&S iVotronic is used, according to VerifiedVoting.org's database at polling places in Arkansas, Washington D.C., Florida, Indiana, Kansas, Kentucky, Missouri, Mississippi, New Jersey, Ohio, Pennsylvania, South Carolina, Tennessee, Texas, Virginia, Wisconsin, and West Virginia.

Read the full story at The Brad Blog.

This is interesting news because in the past years, it has mainly been Democratic state or independent organizations that have been raising this concern on the lack of transparency and intergrity of electronic voting machines. It is GREAT news that a Republican organization is finally taking this issue of election fraud seriously. As AuditAZ has stated over and over again, election integrity is not about the Right or Left. It is about right and wrong. No democracy can ensue when votes cannot be counted accurately, transparently, and one vote per person.